My Halloween cake project is done and I couldn't be more happy with it. This was a purely for me project. It has been a long while since I made a cake just to play. I sunk a good 30 plus hours in it. In between the eyeball cake inside a cake and the from scratch modeling chocolate flowers with meringue cookie eyes, it was a labor of love. This cake is a compilation of lots of things that interest me. Halloween being number 1 :) I had already decided to make a Halloween cake and had been researching ideas. During the research, I saw several Halloween unicorn cakes and have been wanting to play with that trend as well.

Of course, this being my first unicorn cake,  I didn't want a happy and cheerful unicorn. There had to be something a little off about it. So I bring you pretty in the front and jacked up in the back!

This turned out to be a perfect idea.  A week after working out the final plan, I was asked to help so the makeup for a local production called "Zombie Shakespeare". Yay! My cake now had a deadline and a destination. We shared it with the Chinooks staff and a few folks still bellied up to the bar after our finally showing. Since it was late, dark, and I was tired and may have had too many Tipsy Mermaid drinks at that point, I don't have any good pictures of the inside.

When cutting into the cake, the bottom tier had surprise eyes inside.  Here is my earlier post about it. It was two full cakes so double layer of eyes separated with chocolate smbc.

The top tier "bled" raspberry coulis. Its a pretty simple process.  I stacked 3 cakes together, the middle was cut to hold a pool of blood. Since this cake was going to take a few days to finish decorating, I lined the pool with marzipan to keep the cake from getting soggy.

Of course, there is no fun in Halloween unless I torture my loved ones in the process.

Both cakes were encased in espresso dark chocolate ganache. Again, I needed it to be sturdy to support the weight of the heavy modeling chocolate flowers and stable so that I could take my time decorating. This cake was only a 7 inch base and 5 inch top but it was a heavy mofo!

Once they were ganached, it was time to add some exposed brain. To do that, I carved out a little cake and tinted modeling chocolate to a nasty grey color. To which I later painted in some red and dry brushed with grey coloring to give it dimension. Before packing it up for the final show, I brushed it with corn syrup to give it a gross sheen.

Both tiers were then covered with black fondant.

The top had homemade edible glitter on it. I am in love with this stuff. It is super simple to make. Best of all, it doesn't alter the taste of your cake. And to my surprise, even though you think it would be sharp or rough in the mouth, it just melts on contact. So at worst, you have black spit. But hey, what is Halloween without a little black on your tongue!

Check out Kara's Couture Cakes for a rocking tutorial.

A side note, as it falls away from the acetate, it makes strange crackling noises. Don't combine this with late night scary movie viewing!

I so love this look.

Now time to apply the flowers. The week before, I made meringue eyes to go in some of the flowers. Years ago, I made them for the first time and thought it would be fun to bring them back. The last time, they kind of looked like colorful boobs as I made them in pairs. Here are this year's. Notice they are in a dehydrator. I live in a rain forest and it needed to dry them out a bit so they didn't pick up the moisture in the air and become mush on the cake.

And then I set out to make the modeling chocolate rosettes. Lots of rosettes. I have warm hands and it is always a struggle to keep from melting modeling chocolate or buttercream while piping. After opening the window and letting the Alaska air in, this went much faster.

Next went in the gumpaste sutures.

Then all that was left was to put on the horn, ears, eyes, and necklace. The cameo skeleton mold and airbrush colors for the horn came from The Cookie Countess. I opted not to do the traditional buttercream rosette mane. It had enough going on and I felt it would be just too much. I'm happy that I stopped there. Sometimes restraint is the hardest part!

And the sky stopped dripping just long enough for me to snap some pictures before heading out to cover zombies in corn syrup blood and marshmallow burns. Now, you didn't think I would leave food out my Halloween make-up skills did you? 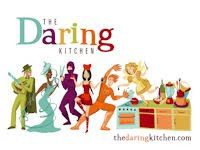